Notice: We propose as your correct country. Switch now.
Products

We storm the highest mountain in Germany 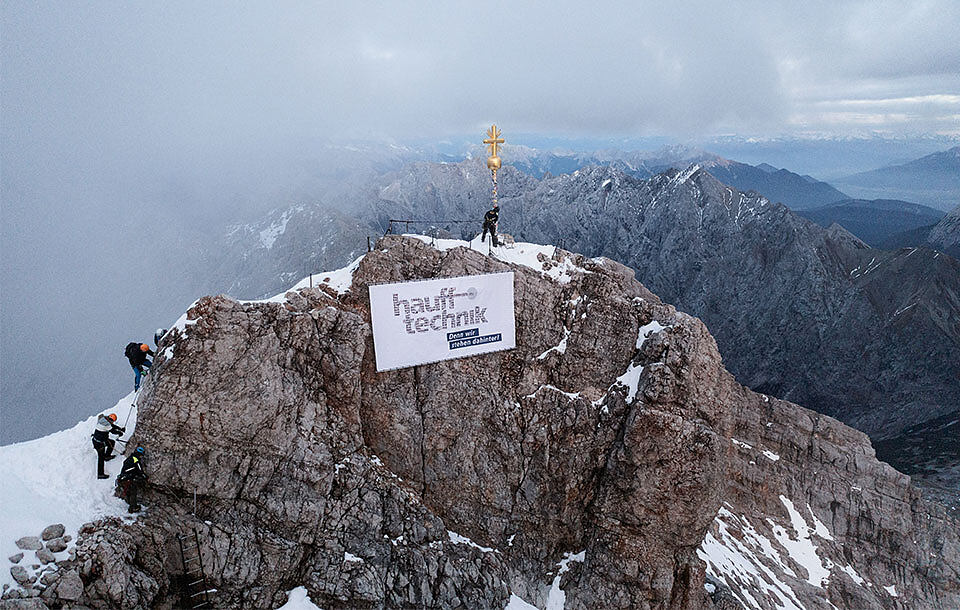 Last weekend, around 350 employees stormed the summit of Germany's highest mountain and celebrated a staff party the likes of which Hauff-Technik has never seen before.

In November last year, Hauff-Technik announced an annual turnover of over 100 million euros, setting a new record. "That was a great result and definitely a reason to celebrate," said Dr. Michael Seibold, Managing Director of Hauff-Technik GmbH & Co. KG. In 2014, the company laid the foundation for further growth with the new location. Since then, in addition to the turnover figure, the number of employees has also risen to over 500 in the meantime. "Above all, however, we have grown in diversity.

We have founded subsidiaries and formed several pillars at once. Through this versatility, through digitalisation, through the logistics centre, Hauff-Technik has become a real efficiency machine," the managing director continues. Hauff-Technik has already organised staff parties in the past, which generated enthusiasm among the employees. In summer 2017, for example, the entire workforce travelled with the nostalgic steam locomotive from Hermaringen to the subsequent boat trip to Lindau under the motto "Full steam ahead", and in 2019 celebrated a rock concert on the company's own premises.

"Due to the Corona pandemic, it was not possible to organise an event for employees the last two years. That's why we are all the more pleased that the Gipfelsturm could now take place. And with Congresservice Alpin Convention GmbH from Garmisch-Partenkirchen, we had a strong partner who supported us professionally in the implementation," says Katja Paul, organiser and employee from Corporate Communications.

Appropriate precautions were taken by the organising team for the safety of the staff and to avoid a major infection incident. "On the day of arrival, all participants were tested for the corona virus under the guidance of our company doctor and the Praeventi team before boarding the coaches. Only those with a negative test result were allowed to board the buses," the organisational team continued.

Under the motto "Ascent to new dimensions", the 350 employees travelled to the foot of the Zugspitze in a total of seven coaches. After the ascent with the Bavarian rack railway, the last stage followed with the gondola to the summit. The last metres to the summit were covered by Managing Director Dr. Michael Seibold alone, accompanied by three mountain guides and rap beatbox duo "Pheel Fresh". From there, he addressed the entire staff after "Pheel Fresh" rapped through almost 70 years of Hauff-Technik history.

In his speech, Michael Seibold felt it was important not only to thank the employees for their individual achievements, but also to offer a glimpse of what the future holds. "Every individual at Hauff-Technik is a driver of success. It doesn't matter what task he or she is entrusted with or in what function. The WE counts! Without him or her, we would not be where we are today.
In times when a war is being waged at the gates of Europe, the resulting energy shortage, while a pandemic is still ongoing, it was also and above all important to me to convey security and confidence to colleagues and to offer a perspective that, even if you are at the summit, things will continue. You get a good all-round view from there to sound out the next goal and keep going." A subsequent rock concert by the Bavarian band DA CAPO MUSIC formed a further highlight and finally brought the unforgettable summit to a close.
Overview

Where would you place yourself?